You can find some background for this post here: Deep Learning with Python!

Caffe has its strengths and its weaknesses. For example, there are some outstanding issues regarding using multiple GPUs in parallel during training. According to a wonderful write-up by Tomasz Malisiewicz titled Deep down the rabbit hole: CVPR 2015 and beyond:

Caffe is much more popular that Torch, but when talking to some power users of Deep Learning (like +Andrej Karpathy and other DeepMind scientists), a certain group of experts seems to be migrating from Caffe to Torch.

I read somewhere else that Caffe : Torch :: Applications : Research. If you want to quickly iterate on datasets with the aim of building applications, Caffe gives you a flexible framework with a lot of built-in tools to do so; with Python bindings to boot. Additionally, one of its great features is that you can essentially specify all of the layers and layer parameters of a neural network with a simple config file. I know that there are some out there (you know who you are! :-P) who do not like this feature.

Caffe has some prerequisites, which, unless you’ve already got a CUDA driver installed, will prevent you from getting started in just minutes.

For going against your GPU, you’ll need:

There are plenty of instructions on the caffe site for getting these prerequisites installed.

Since we’re using Python, pay EXTRA SPECIAL ATTENTION to the Makefile.config instructions. Particularly, know where your Python and Numpy live.

Mine’s a little complicated since I use Homebrew for lots of things, but here’s what my config info looks like. This will save you from pulling some hair out:

Add these to your ~/.bash_profile or just export them in your session.

Cool. Now, in your Makefile.config file:

Moving on! In your <path>/<to>/caffe/ directory:

When all of this is done, start Python in <path>/<to>/caffe/python/.

Awesome! Finally, we can let the real fun begin.

Caffe, having the great ecosystem that it does, has a special place called the “Model Zoo” where various reference models and variations thereof are curated in one place with code and citations. Be sure to check it out for Caffe implementations of some of the most recent cutting-edge research, such as GoogLeNet and models from the CVPR2015 DeepVision workshop, which occurred after this blog post began.

If you’re interested in some light background reading regarding GoogLeNet, the deep learning model that Google Deep Dream uses as its default, you should check out the following arXiv preprint: Going Deeper with Convolutions1. Note that GoogLeNet is an homage to the pioneering work LeNet2, built by Yann LeCun in the 80’s for handwritten digit recognition.

In fact, here is a great Caffe tutorial building LeNet by hand and training it on MNIST. But I thought you’d find Google Deep Dream more interesting as a blog post :-).

In this Google Research blog post, Google describes its notion of Inceptionism, and how it visualizes going deeper into neural networks. A couple of weeks later, they published this follow-up blog post, which links you to the DeepDream repo, conveniently hosted on GitHub and available as an IPython Notebook here.

It’s simple enough to follow the IPython Notebook, but here are some instructions:

If you’re a nerd like me, you’re insane enough to go straight to the source: Google’s protobuf GitHub repo, found here.

The installation instructions are fairly simple. Unless you are using a Mac. You can follow their instructions using MacPorts, or you can join me in 2015 and use Homebrew :-) (or the package manager of your choice).

Here’s the flow for a Mac user:

Nice. Now you can install protobuf. Go to a directory where you’d like to put the protobuf repo.

Then do the following:

Go to a directory where you’d like to put the Deep Dream IPython notebook and git clone it!

Suffice to say, I won’t copy the whole notebook here. That being said, let’s take a closer look.

Did you run into an error when you tried to load in GoogLeNet? I did. Just because you’ve downloaded and installed Caffe doesn’t mean that you’re ready to brew!

Once that has finished, you should be able to run the block of dream.ipynb that loads in a pretrained GoogLeNet. Make sure you set your <path>/<to>/caffe/models/bvlc_googlenet properly. Now you’re ready to deep dream.

Get down a few lines to where you assign:

You don’t need to be an art history buff to appreciate this work. Perhaps you’re a fan of Ferris Bueller’s Day Off? Who can forget the moment when Cameron sees this work from afar and becomes fixated on its perfection? Here’s a clip from their visit to the Art Institute of Chicago (click here if you want to see the whole thing): 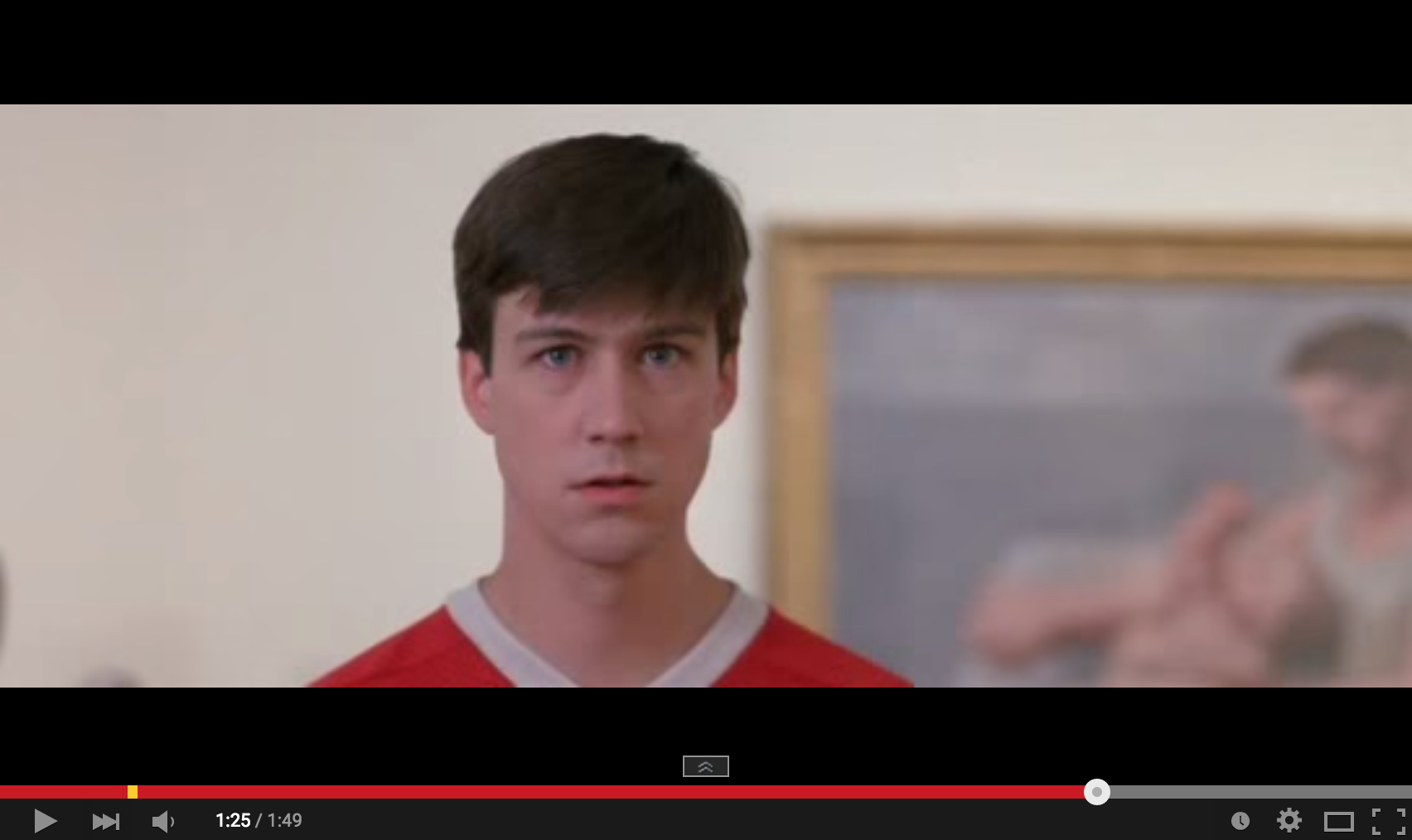 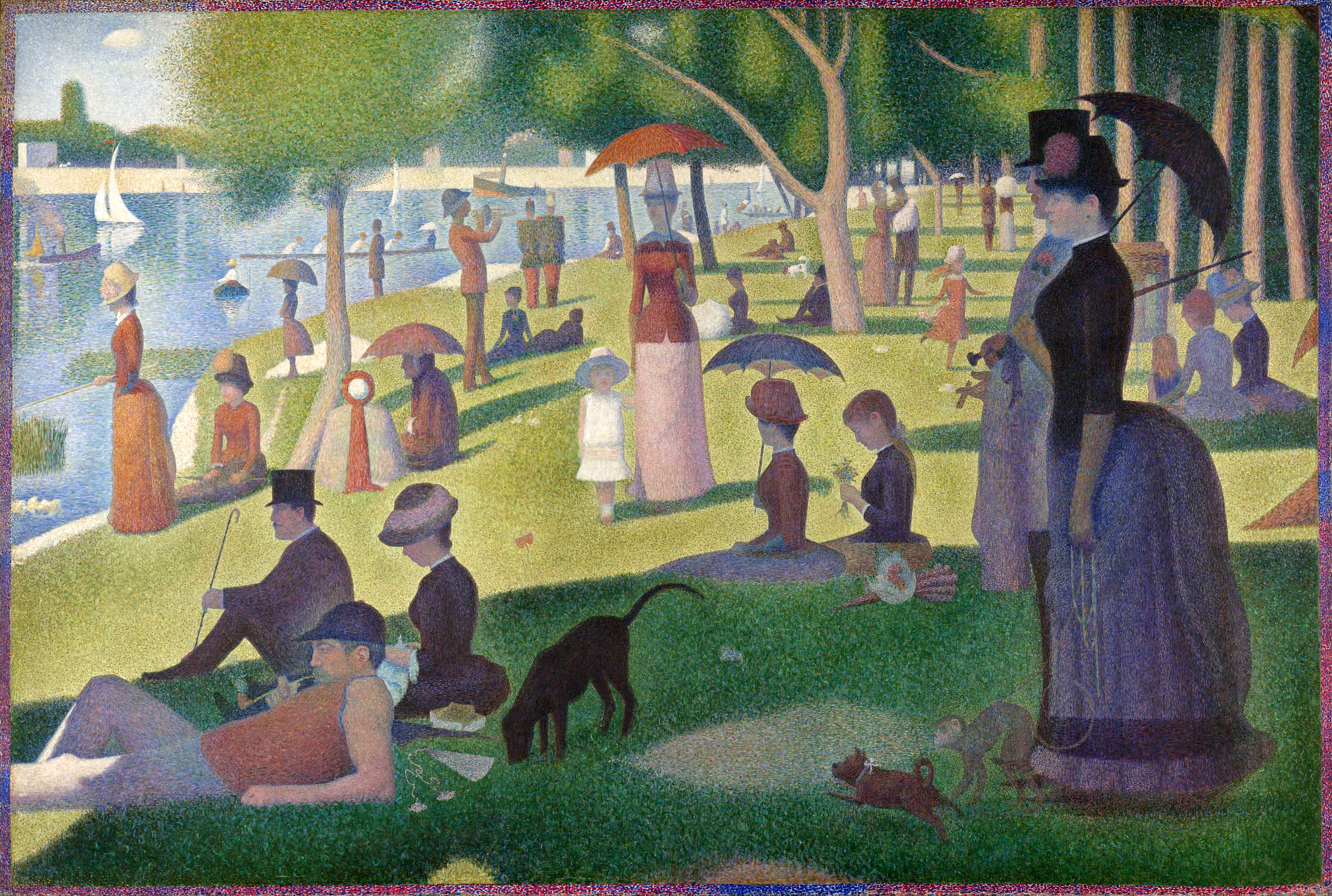 Prepare for your mind to be blown

Take a deep breath. This is it. This is the moment. It’s so intense. 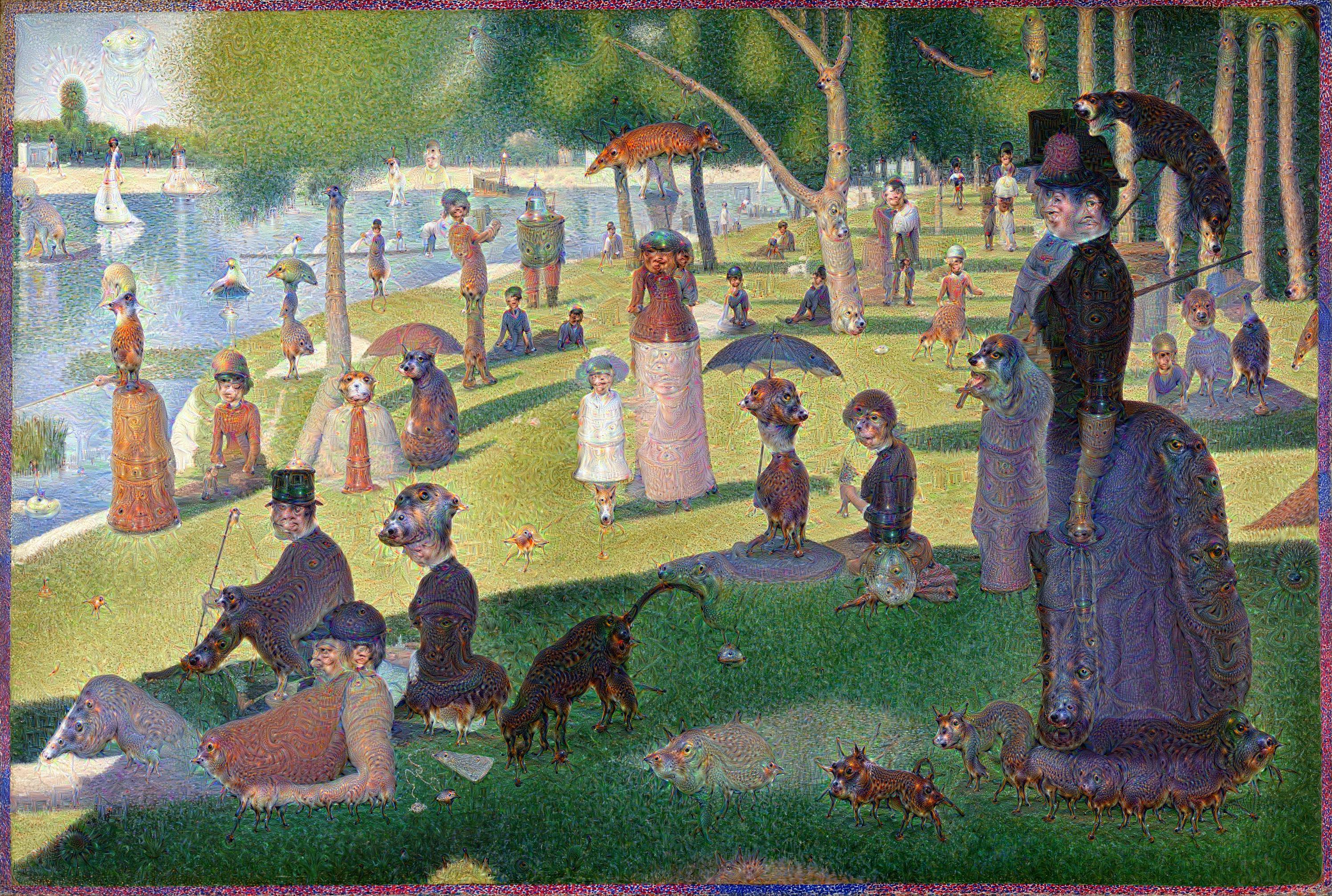 BOOM. Holy mackerel. What are all of these strange animals and pagodas and faces popping in and out of mes amis Parisiens?

Let’s take a look at what else we can do: 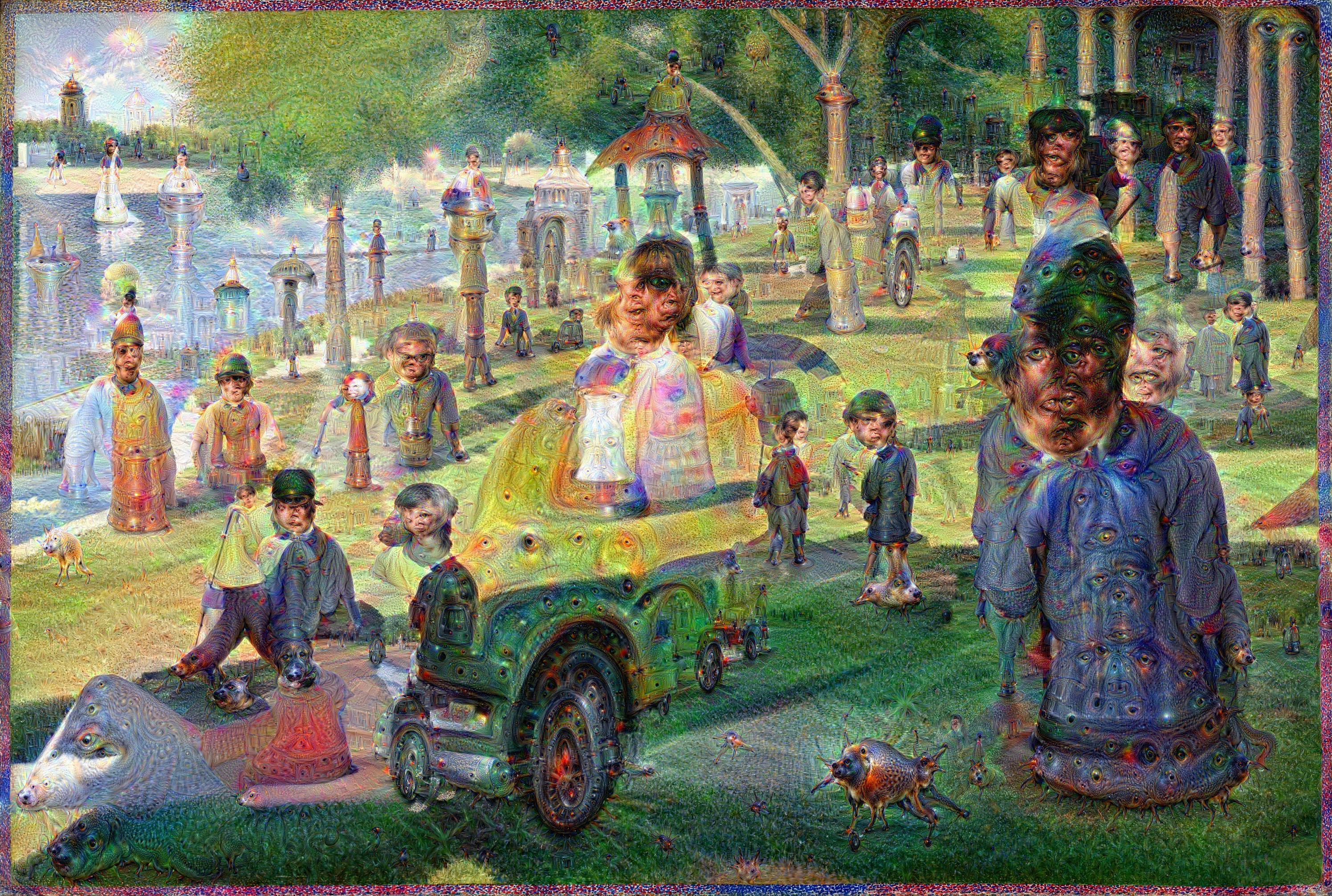 OK, WOW, THIS IS DEFINITELY WEIRDER.

The octave_n parameter default is 4. When you run deepdream(net,img) for the first time, you will see an output that ranges from 0 0 to 3 9. The image is redrawn iter_n times per octave, so 3 9 here indicates (octave) 4 (interation) 10, since we’re counting from 0. Interesting. In music theory, octaves abstractly represent notes whose frequencies are double the previous octave, i.e., you have sung do re me fa so la ti do and both do notes are exactly one octave apart (and whose frequency ratio between the first and second do is 1:2). Here in the notebook you can follow the code to see that the definition of the octave is subject to your own experimentation!

Let’s do one more:

What is the end='inception_3a/output' parameter? Check it out: submit net.blobs.keys() and pick a layer, any layer (except the splits, I think).

Here’s what we get:

How cool is that? Does it seem at all Kandinsky-esque, or is it just me?

What to do next

You’ve got the power of Deep Dreaming in your hands. What do you want to do? There are a couple of interesting helper functions in the notebook that I am intentionally not covering so that you can explore them yourself! 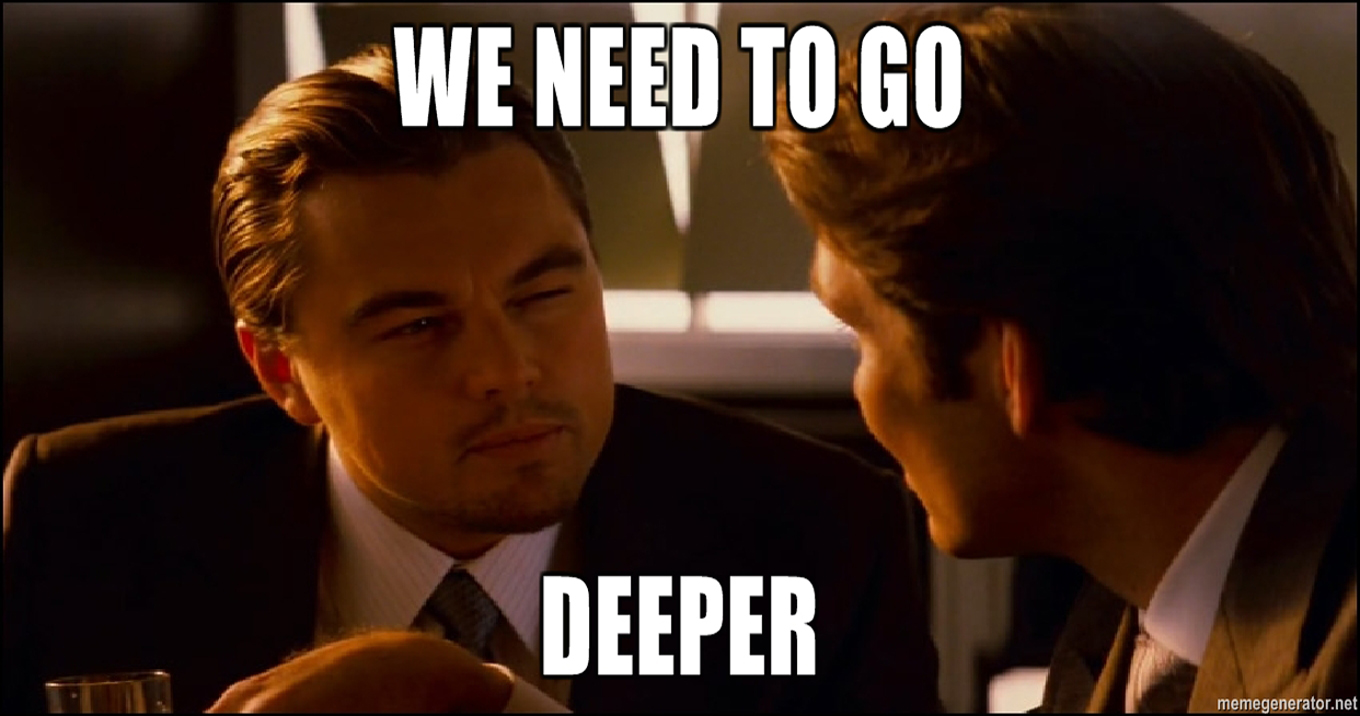 The second gives you the ability to use another image as the objective guide of your deep dreaming. Put another way, you can kind of think of this helper function as mashing up your deep dreaming with one image that tries to align with the other.

Last, if you’re feeling particularly full of free time, try building a tree of such deep dreaming. Maybe you want to train an image on a hierarchy of different images, each one dreamed from a layer below. Moreover, don’t just follow my example and deep dream with oil on canvas. Try using natural images instead. Depending on your parameters, your deep dream results could be very far out indeed.

WARNING: Deep dreaming photos of people whom you love is definitely nighmare-inducing. Don’t say I didn’t warn you.